My friend Yap took me to the relatively new Sabah Art Gallery.

It’s an ecologically friendly building, powered by solar panels. Responsive lights turn on as you approach a painting. It’s a little freaky, but you get used to it 🙂

The gallery building is octagonal, and shaped like the wicker baskets traditionally used by local KadazanDusun communities when harvesting rice. This continues today, albeit to a lesser degree. Below is a painting which shows some of that. 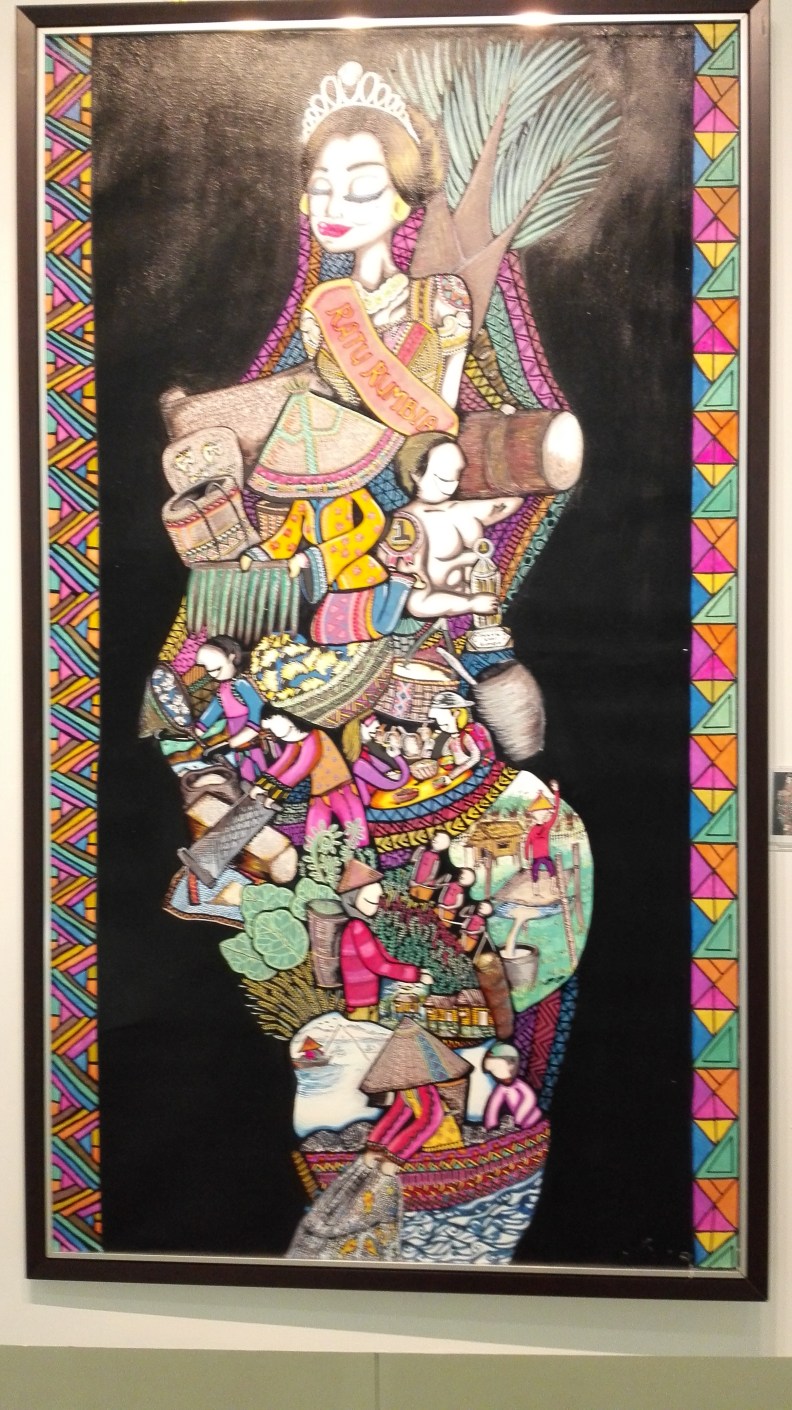 At the top of this painting is a contestant from the annual beauty pageant, part of the Pesta Kaamatan harvest festival celebrated in Sabah.

Moving down the painting, there are people harvesting rice from the paddy fields, and extracting sago from the sago plants using a sawing tool. (They seem to produce white shavings which end up as tiny pearl balls in delicious desserts. I have no idea how it’s done.). People are also making rice wine, called  tapai, which is consumed from massive sealed urns with a very long straw.

The local word for “cheers” or “bottoms up” is aramaiti. Actually, it’s more like, “Araaamaitiii!”. You get the idea. It’s a very happy festival!

At the bottom of the painting, people are fishing in single boats and using nets. Fish, harvest rice, drink tapai. What a beautiful simple life.

Here is a wood carving of people extracting sago using a scraping tool. (Sorry. It’s just a blog, folks.) The shavings are caught in a wide wicker tray underneath. Then they magically become sago balls and are served with ice cream! 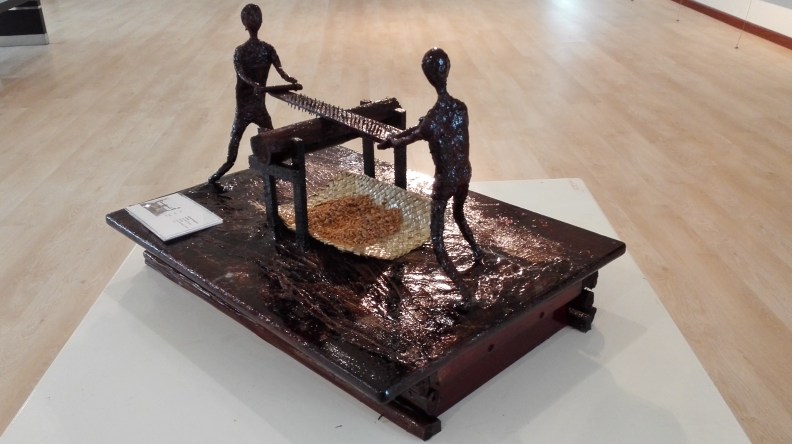 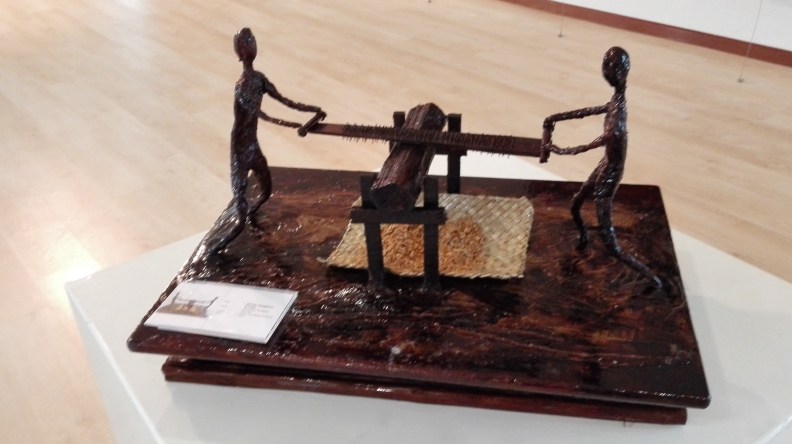 The two works below are by Yap’s friends, Tan Sheau Ling. These are scenes from a tamu, which is a local market. The first was created using a gas lighter to burn onto wood. The second was using an ordinary biro pen. 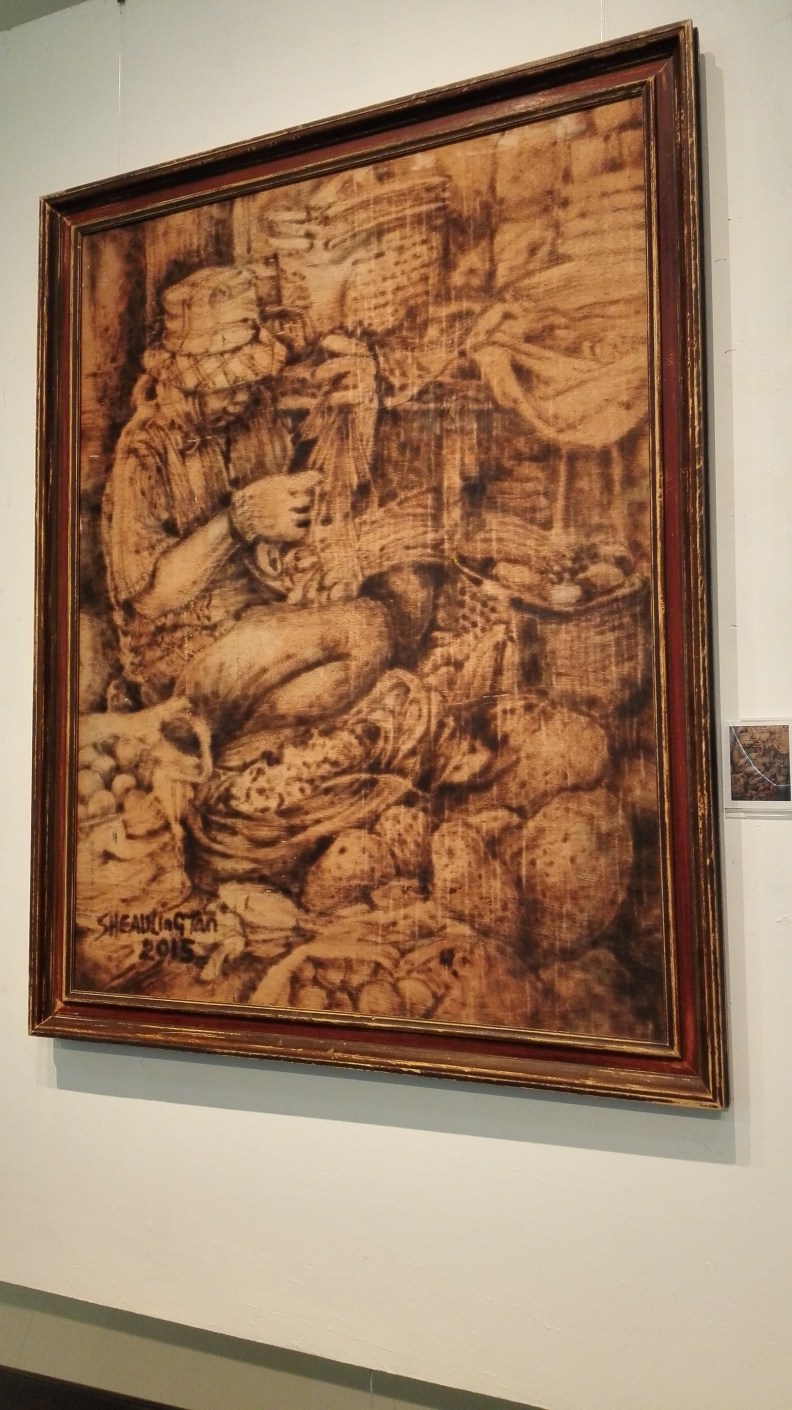 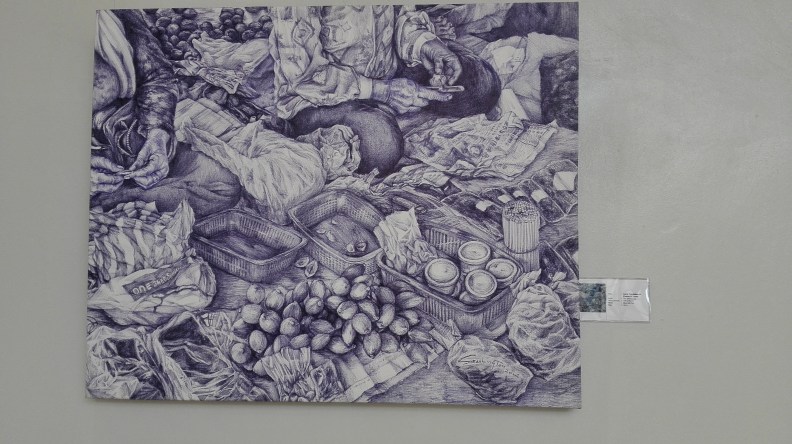 This work below is called, “The Dying Culture of the Rungus Tribe”. It is by Michealla Vun Yi Ling. 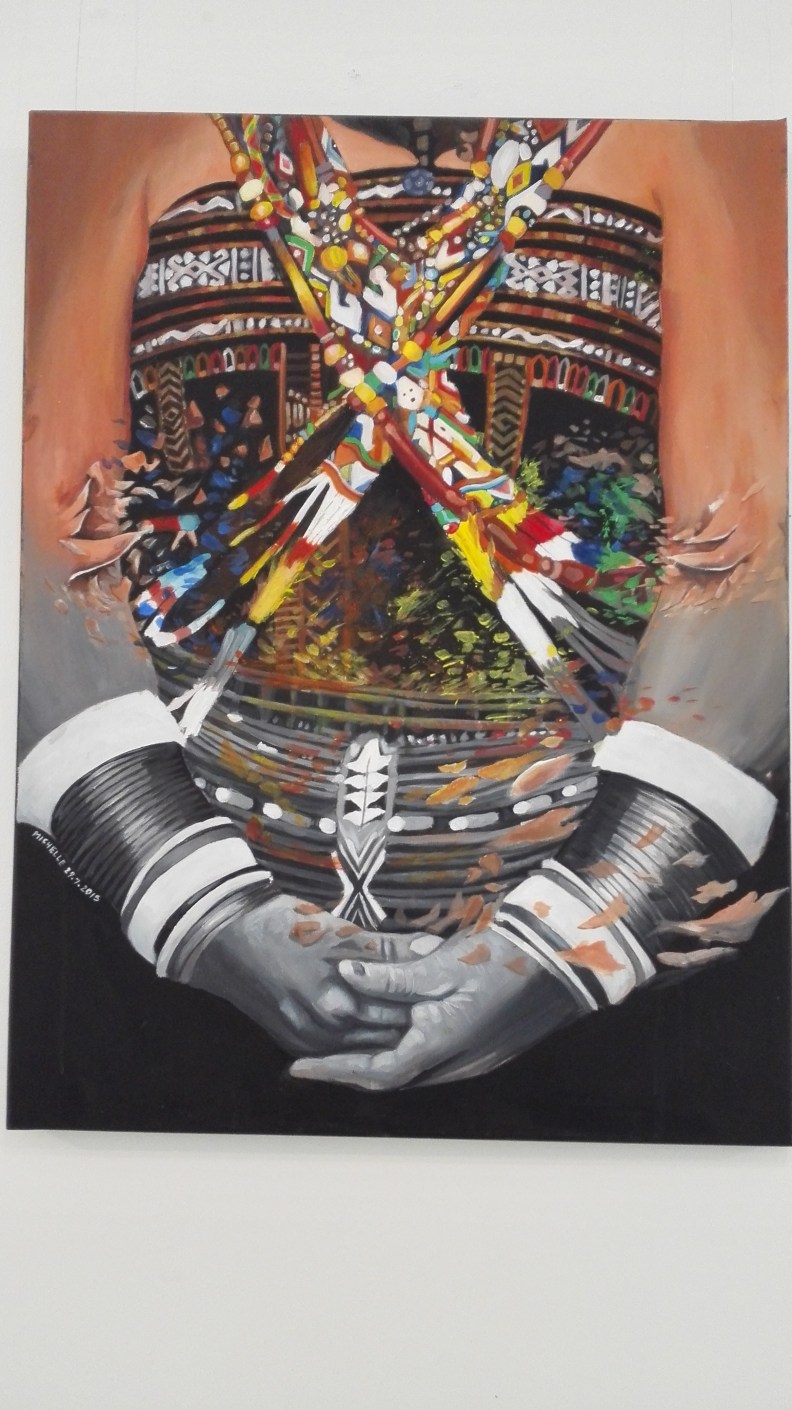 Yap explained that the Rungus people are famous for their beading work.
I’m no art critic, but I guess the fade to black and white is as the title says.

For my book launch in 2012, mad Yap went to Kudat to place an order for SabahSongs sashes to be made by genuine Rungus craftswomen. Now, Sabahans are known for taking their time about things… and I believe he had to make a desperate dawn drive to Kudat (hours away and no motorways) on the DAY of the launch, to get these in time! A bit of stress for him. Bless. What a gorgeous surprise it was.  I have several of these sashes with me in Australia. 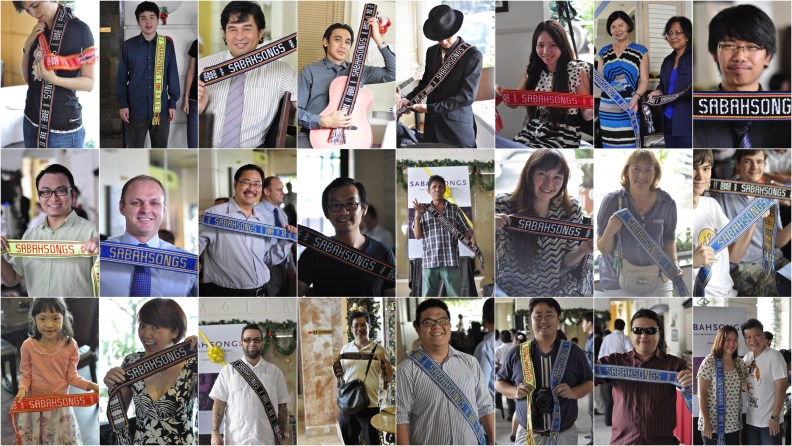 This is a replica of the much loved Atkinson Clock Tower. It’s Sabah’s oldest structure, a 1905 wooden clocktower which still stands today. 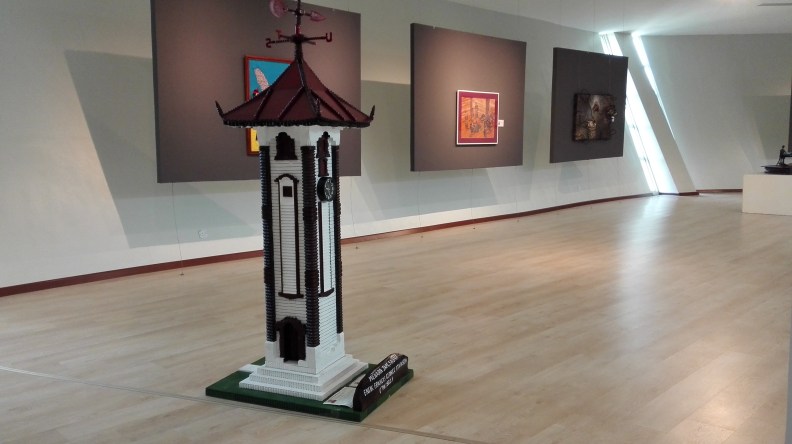 This is called Kudat Jetty. 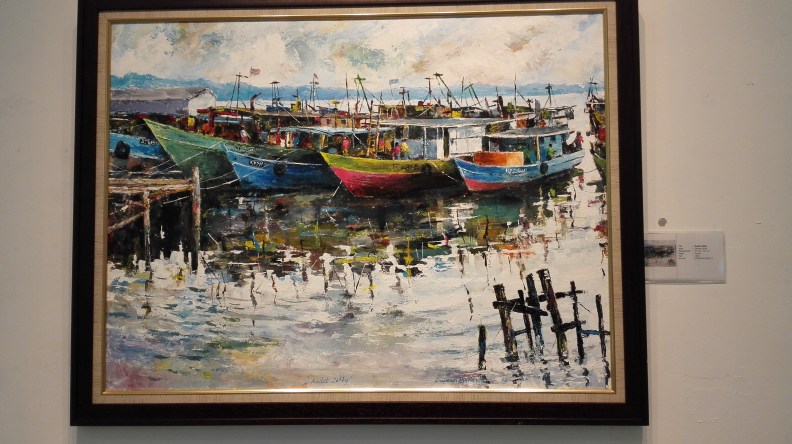 I have been to Kudat. Mike plays golf and has a good school friend there. Here are a few posts under the  Kudat tag. I had amazing seafood there and wished I could have followed people on to their boats. But hey.

Before we left, Yap dragged me over to one corner where posters of Roger Wang’s guitar events were. One was  Bunyi Gitar x:po (jazzy lingo huh?) which was an exhibition of guitar related everything: craftmanship, wood varieties, traditional instruments and evolution. Performers, luthiers and guitar enthusiasts came from across the country and from overseas. 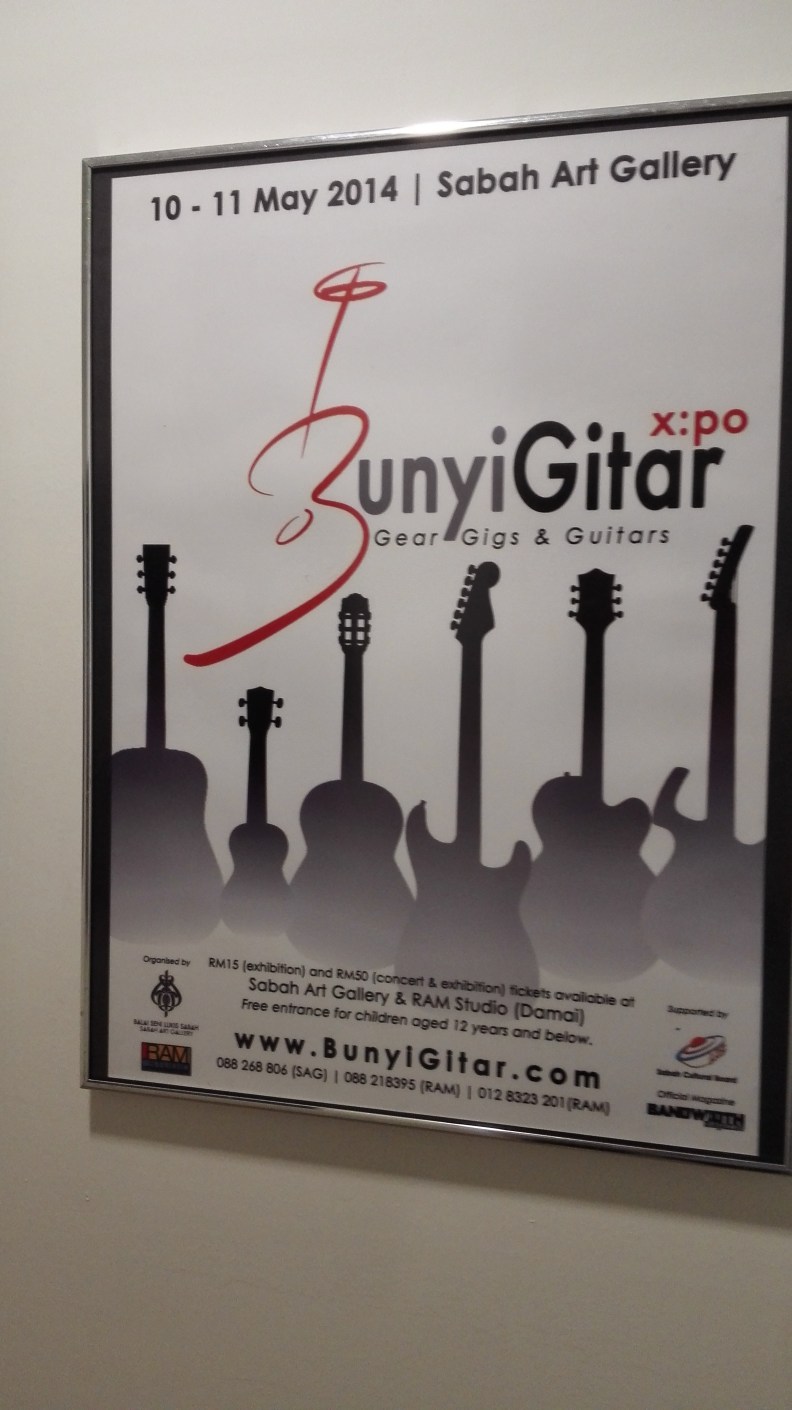 Roger says much more about it on his website.

Here’s a poster of the Colours Concert which Yap pointedly said, “The one you missed.” Sigh. 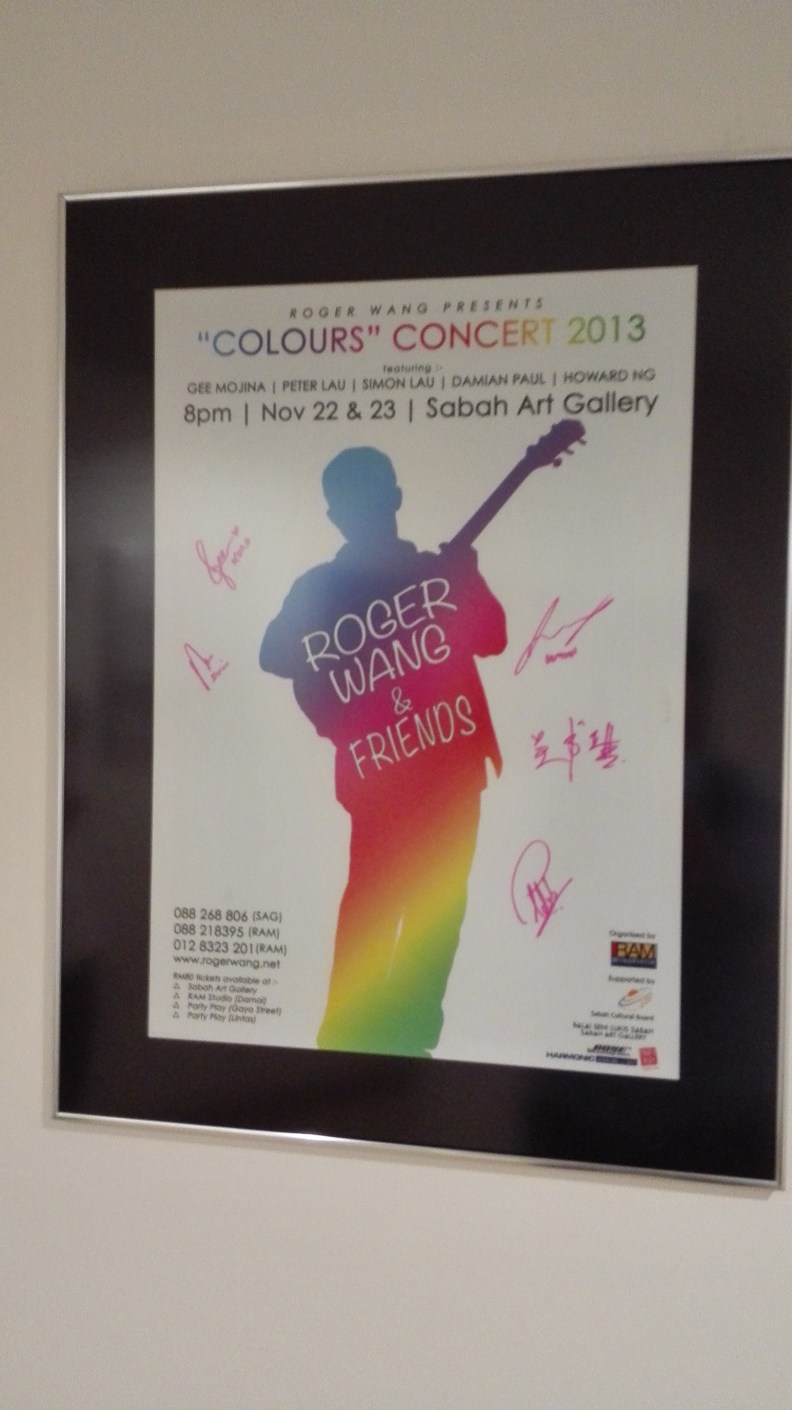 So that’s my trip to the art gallery. He’s got a few more afternoons planned for me. We are not done yet… 🙂 Bye for now! 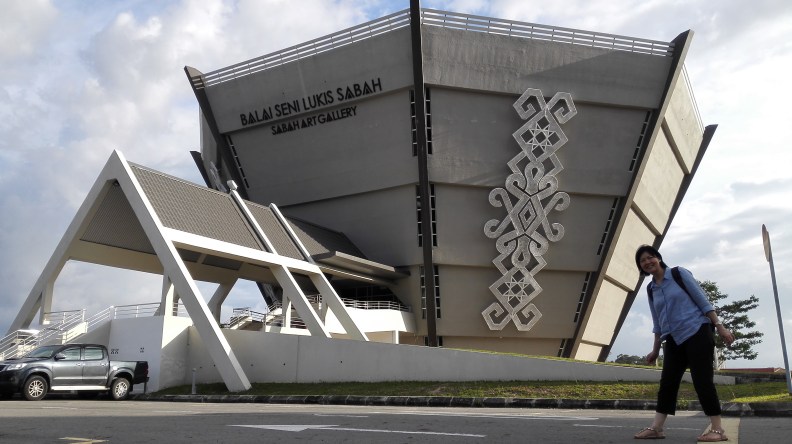